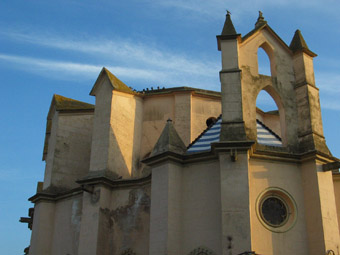 Devotion to Mary in Canet de Mar is reflected in the splendid Sanctuary of the Misericordia, built between 1853 and 1857. The architect was Francesc Daniel Molina, who gave a neo gothic style to the whole project. This can be clearly appreciated in the front of the building, with its gothic arch remaking the whole entrance and its huge rose window. The inside looks very differently from the original due to a fire in 1936. The fire affected the whole wood ornamentation, pictures, the cover and image of the virgin. The pictures present at the moment were painted between 1997 and 2001, and partly imitate the former ones in the temple. The Sanctuary is very popular in the region (Maresme) as many couple make the most of it celebrating their weddings.